There is a natural way to balance blood glucose!

After 14 years of research, it has been clinically proven: Ascarx naturally lowers blood glucose! 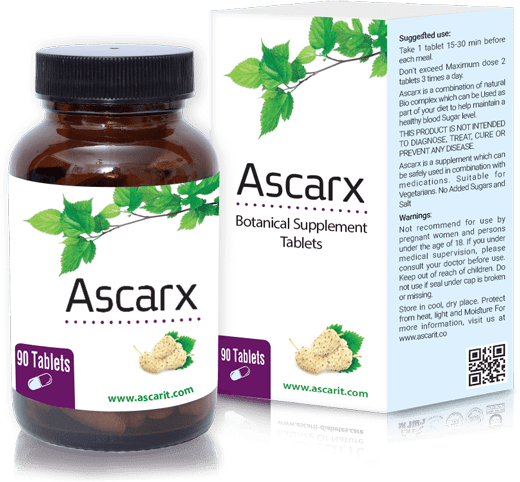 A few more things to know…

Ascarx has been studied clinically and is a nutrition supplement that helps balance blood glucose levels and improve diabetic patients’ quality of life.
It is also very effective in pre-diabetes cases and prevents the patient from further deterioration.
In type 2 diabetes, Ascarx is effective as an alternative therapeutic tool replacing traditional chemical drugs that often cause severe side effects.

Ascarx is a synergistic product of its natural components that balances blood glucose levels by multiple actions including reducing the ability of carbohydrates to be absorbed in the intestine, allowing glucose to be stored by decreasing insulin resistance and lowering production of new glucose in the body. Ascarx has been clinically studied in collaboration with Maccabi Health Services and has been found to assist diabetic and pre-diabetic patients.

Ascarx is a herbal compound that has the potential to mimic conventional diabetic drugs. The materials have been refined with the latest technologies. It includes six synergistic plants. . A preliminary study showed blood glucose reduction was not effective with individual plants, but only when combined. This led to a clinical trial of 119 patients who were treated with Ascarx. The results can be found here.

Ascarx is patented in Israel and Europe. It is manufactured in Israel by Bara company according to the GMP standard and received FDA approval for distribution.

is produced by six plants, with no artificial additives

A breakthrough in diabetes

Dr. Sagi | 71 years old at the beginning of treatment | Diabetic for 16 years

I am diabetic since the age of 55. My experience as a doctor has taught me over the years that you can always learn something new. I take the glucophage pill since I was diagnosed with diabetes and I am not balanced yet. Blood Sugar Hemoglobin Index ((HbA1c is 7.6) At  the age of 70, I decided to try the botanical supplement Ascarx, after Dr. Fogel contacted me and offered me to take the supplement that he clinically researched and developed....

I didn't want to hurt my body with chemical pills, so when I read about Ascarx in the newspaper, I called in order to get more information and decided to try it. I recommend Ascarit company wherever I go, and talk about Ascarx and how it balances my blood sugar to everyone I meet....

I am diabetic since the age of 47. I was diagnosed with diabetes after going through 6 brain infarcts. My  condition was really bad, I was an athlete, I was exercising and my body was traumatized.

When I was diagnosed with diabetes my A1C was 11! I started insulin therapy straight away, I would inject 80 units a day and recently started to maintain my diet and take care of myself which helped me drop to 60 units...

For more success stories click here
Need Help? Chat with us
Start a Conversation
Hi! Click one of our member below to chat on Whatsapp
The team typically replies in a few minutes.
Julia
Customer care